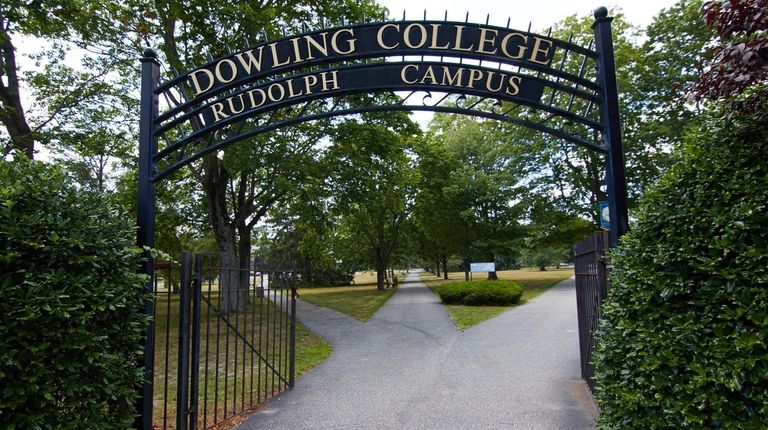 An entrance to the Dowling College campus in Oakdale in June 2016, the year it closed. Photo Credit: Ed Betz

Both sides in a $50 million lawsuit filed against Dowling College trustees and officials by a bankruptcy court trustee have agreed to a settlement in principal that would nix a public airing of the institution’s 2016 bankruptcy and closure.

A letter filed in U.S. District Court in Central Islip on Aug. 1 says the parties “reached a consensual settlement of the action in principal,” paving the way for a potential dismissal.

Any settlement is likely to be confidential. Lawyers for both sides are scheduled to be in court Monday to discuss the case.

Dowling trustees had directors’ and officers’ liability insurance, and so a money settlement, if any, likely would be paid through insurance.

Ronald Friedman, the bankruptcy court trustee for the college’s unsecured creditors, did not respond Wednesday to a request for comment.

As Newsday reported in July, the trustee filed the lawsuit against 12 former Dowling trustees and two officials, including one-time president and benefactor Scott Rudolph, alleging years of “waste, mismanagement and breach of fiduciary duty.”

Howard Kleinberg, the Garden City-based attorney for the trustees, at the time said the trustees denied the charges and intended to defend against them “vigorously.” Kleinberg on Wednesday declined to comment because of “ongoing settlement discussions.”

In a motion to dismiss the case, filed in bankruptcy court July 15, Kleinberg argued the case should not go forward because two of the claims already exceeded the three-year statute of limitations. The case was filed May 1, but “the vast majority of the plaintiff’s allegations concern events occurring prior to May 2016,” he wrote.

He also asserted that the complaint stops short of accusing the trustees of “bad faith or other facts” sufficient to overcome certain legal protections afforded a corporation’s officers, directors and trustees.

Dowling, which was established in 1968 and had campuses in Oakdale and Shirley, ran into deep financial trouble and in November 2016 filed for bankruptcy court protection. Students and others tied to the institution were stunned by its rapid decline and sudden closure.

The complaint lays out a chronological litany of the board’s alleged missteps, “negligence” and potential conflicts by some tied to its board, while citing a failure by the institution’s outside auditor, KPMG, to flag and report those missteps. KPMG declined to comment.

“Although it was obvious that Dowling could not sustain two campuses,” the suit charges, trustees “never streamlined Dowling’s operations, never underwent any significant self-examination to improve Dowling’s academics or support services, and never directed Dowling’s available resources toward selected programs intended to enhance Dowling’s success ….” They also “accepted the cockeyed optimism of their presidential hires and continued to operate Dowling as if its problems would simply disappear,” according to the suit.

The suit pegs 2006 as the beginning of the end for Dowling, with another round of tax-exempt debt filed to finance expansion of the Shirley campus and its athletic field complex for $4 million. Former Suffolk County Executive Robert Gaffney was hired as president in October 2006, with $57 million of debt on the books. Ratings downgrades on Wall Street continued.

Michael Puorro, the former chairman of Dowling’s trustees, told Newsday last month that rather than contributing to its downfall, Dowling’s board “did its utmost in efforts in its attempt to save the college.” He called the suit “nothing more than a money reach by certain individuals in the creditor trust.”